After 16 days and 181 rounds the spectrum auction for mobile broadband ended today in Mainz. All three companies, Telefónica Deutschland GmbH & Co. OHG, Telekom Deutschland GmbH and Vodafone GmbH, were successful in bidding for spectrum in line with their business models:

The auction has been held as an open ascending simultaneous multiround auction. The award proceedings finished in auction round 181 with the following result: 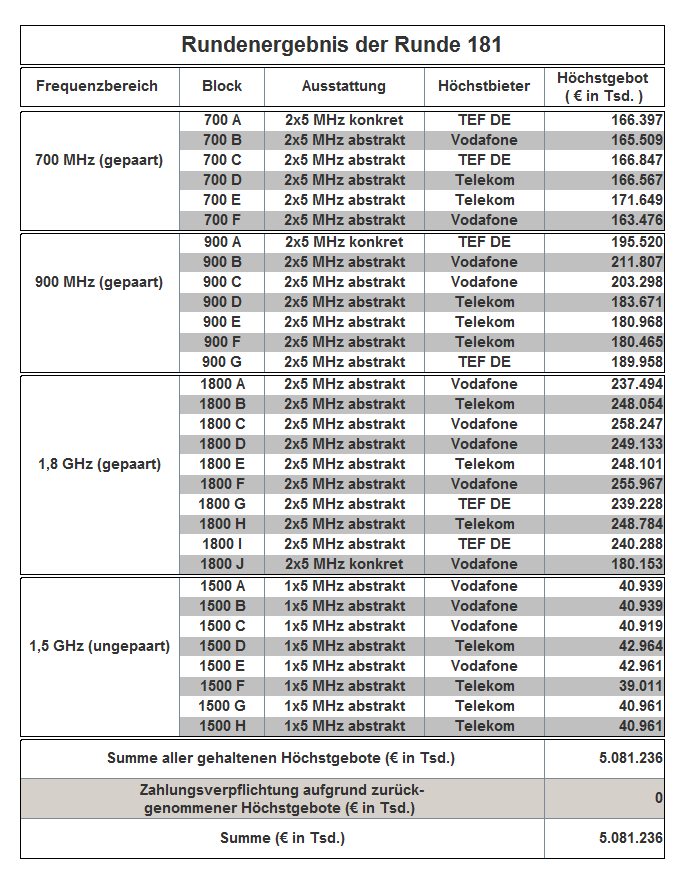 In total 270 MHz of spectrum from the 700 MHz, 900 MHz, 1500 MHz and 1800 MHz bands have been awarded. The spectrum at 900 MHz and 1800 MHz provided the basis for establishing the mobile communications network as it is today, especially nationwide mobile voice communication, and the intention is that it should also be used in the future for broadband internet access.

Frequencies in the 700 MHz band have so far been used for terrestrial television. The switch from DVB-T to DVB-T2 means that they will be freed up and can be used for mobile broadband. Network operators will be able to roll out high speed internet using relatively few base stations to those areas that are currently under-served. The Bundesnetzagentur's goal is to use these frequencies to achieve almost complete nationwide provision of the population with broadband internet access – as is already the case with mobile voice telephony. For this reason the frequency usage rights include a coverage obligation of 98% of the population.